This year was pretty different for us. We lost my grandfather this summer and Ethan turned 16 just a tick too soon and doesn't qualify for youth weekend anymore. He bought some steel and spent some time in the shop trying to learn how to make a knife. My dad showed him the ropes with the torches, the drill press, the grinder, etc - he had fun even though he couldn't hunt. Instead, I had both my daughter and my youngest son for their very first youth weekend.

Saturday morning was the coldest youth weekend I remember in a while. It was 16 when we left the house, and awful crunchy in the woods. Even the gravel was crunchy walking up the road to camp. Duke forgot his bag at home that had his long johns, extra socks, etc. He's only 9, so he's forgiven, but I made him improvise and suck it up. Its probably a little cruel, and I wouldn't ever put him in danger, but we were close to the camp, so I thought it might be a good learning moment. In the end, he was fine anyway. He's pretty hardy I guess. Emma had about 15 layers on - she wasn't taking any chances - and she was fine too. I shoved snacks in their face, they had hot chocolate, and everything was awesome. Except..we didn't catch any deers...we didn't even see any.

We 2 coyotes (more on this later), a mink, a partridge, a mouse and 6 longbeards teamed up.

They passed out pretty early Saturday night, both wanting to head right back out in the morning. Its hard to temper my own enthusiasm to make sure they can make their own choices without feeling pressure to not disappoint dad.

We stayed at my parents house instead of camp, but a couple family members headed up to camp. I asked where they were headed in the morning and they gave me some vague thoughts. I figured when we'd walk up by camp in the morning, they would have already spooked any deer away from the field as they left, so there'd be no risk of us walking through...I figured wrong.

We crested the hill and peeked around a maple tree and I was staring at a doe. She had us pegged but was coming our way. I wasn't sure if the guys in camp had seen them and were making a move, so I backed off. I sent my daughter and my father to what I thought would be the escape route those deer would take, while Duke and I sat tight because we were already exposed. Everything was wrong. The wind was wrong, I was trying not to screw things up for my younger cousin, IF he hadn't left camp yet - but it was still before legal, so it was possible the doe came in our direction. I tried to explain all this to Duke, and he took it like a champ, but was antsy.

As we waited for the right time to move, I turned over my shoulder and saw a set of ears coming up over the hill where we just came from. I spun him around, sat him on the ground right where we were - which was now hidden from the original deer, but exposed to these 2. I set the shooting sticks up for him and tried to put my arm behind him as something to lean back against to steady himself. It was going to be a shot that would push his limit, so I wanted to give him any advantage I could. I said, "Can you see her in the scope?" He said "Yup" - I asked "Can you hold the crosshairs on her steady?". He said "Yup". It was a long shot, and I assumed she was just over 100yrds, but he convinced me he was on her just by his confident responses. I also know my kids are 100% morally locked in, and I knew he wouldn't take it if he didn't feel completely confident. He clicked the safety off, squeezed the trigger, and she did that move where her backend drops so fast it looks like she's being sucked into a hole backwards. He jumped up and yelled "OH YEAH" - loud enough so his sister heard it from where she was set up. However, the 2nd deer was just standing there wondering what happened. Look close here and you'll see a white belly on the left:

Emma and Pop headed our way, and lucky for us, were covered the entire time. I motioned for them to slow down and peek through the fence, where emma spotted the 2nd deer still there. Emma didn't get as much trigger time as Duke this summer/fall, and she whiffed. The deer ran off, we got together to go check Dukes deer out. We were taking some pics, reliving the moment, when I noticed a tail flick across a finger of hardwoods, near another field. Emma and I snuck in to check it out, while Duke and pop stayed with the doe.

I was right, and it was an adult doe, gorging on acorns. Head down, oblivious to us being there. Emma got set up behind a rock pile, and I put my coat down to rest the gun on. She spent a LONG time sizing up the situation, waiting for a good shot. But I think the miss was in her head now, and she was really nervous that she was going to put a bad shot on the doe. She was unfazed by the miss, but worried about wounding one. In the end, she decided to not take the shot, and to head back and celebrate with Duke. She's 12, but to me, that was an adult decision. She later questioned her choice, but I told her it was the right move if thats what she felt at the moment .

We tagged the deer, had a lesson on gutting, then Ethan drove his truck up to help us bring it home. Emma and I hunted the rest of the day with no more sightings. She told me she loved the weekend, and hopes to hunt more this year, along with youth weekend next year, but she also told me that turkey season is still her favorite. I was happy to hear that - I think it meant she didn't feel any pressure to love deer season the way I do.

Dukes first deer ended up as a 99lb doe. The biologist said she was lucky to be that heavy, since her jaw was broken in what looked like an encounter with a car. She was most likely 4yrs old but probably wouldn't have made the winter because there's no way should could eat browse. Not that I'll doubt the biologist, but I have a different theory on what happened to her jaw...in another post. 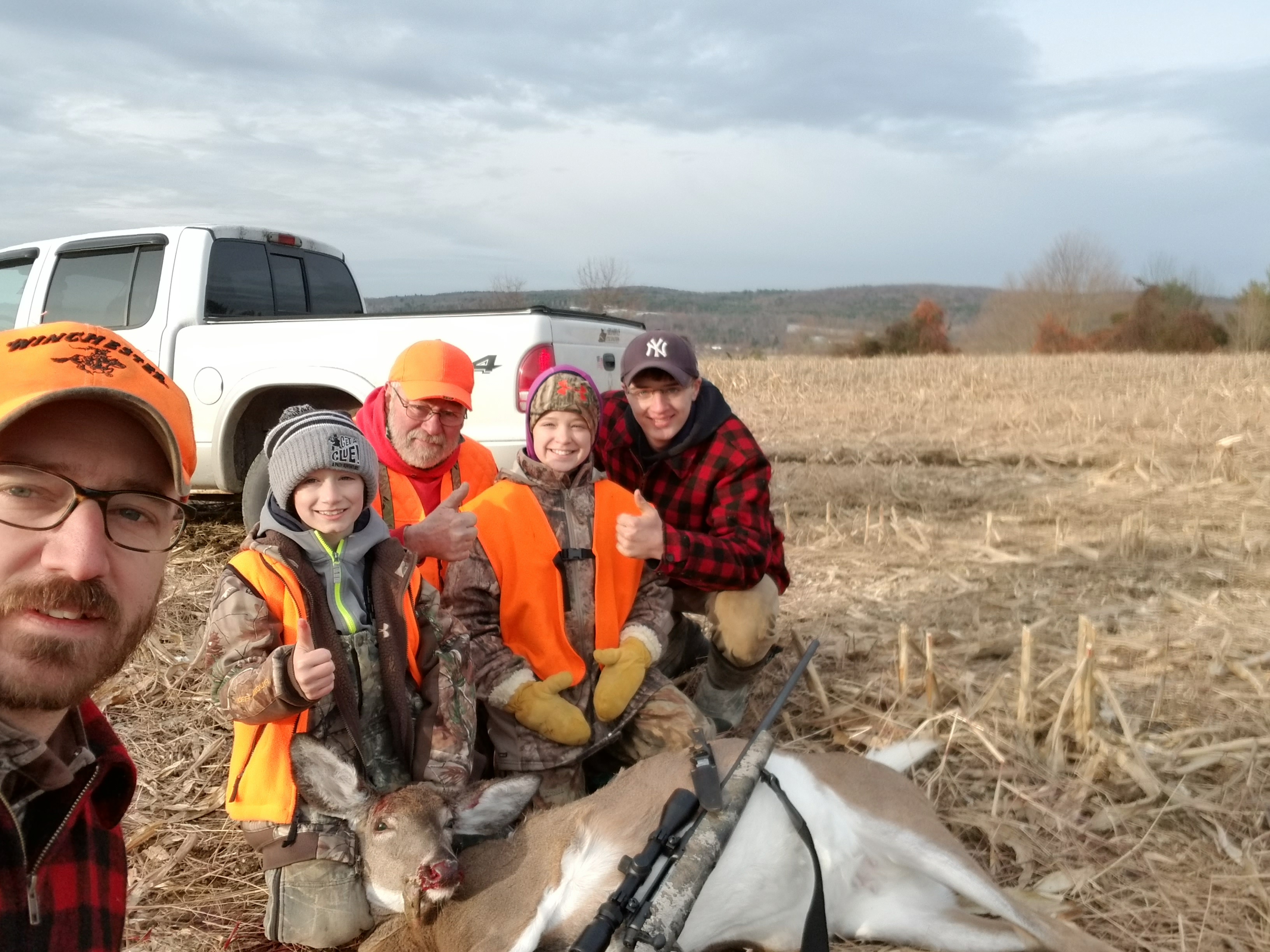 Back to the coyotes and the doe....

A couple weeks ago, some coyotes had a run in with my cousins dog. Its a full size yellow lab, and they bit up his back side enough so it required stitches. I thought that was very odd. We've had coyotes since I was a kid, and we've never even lost a calf to them. Saturday morning on the way into the stand, I heard my cousins OTHER dog, a smaller brittany spaniel barking with a tone that told me something was wrong, but assumed she caught my dad and Duke headed past that house to go sit. Turns out, the coyotes were back and followed the brittany almost to the deck, then ran off when my uncle opened the door to let her in.
A half hour later, Emma and I saw a coyote moving across a field we were near. Emma is conflicted on shooting the coyotes, but didn't mind if I did. But it busted us before coming into range and hit some goldenrod where I lost it.
The next day around noon, we dropped our packs and extra clothing on the side of the field near camp because it had warmed up and we were just taking a quick walk in the other direction to check a trail cam. When we came back out, we walked around a corner and there was a coyote 15-20yrds from our gear and walking right toward them. It turned so fast that it slipped on the ice and fell on its side. It still got up and got out of there before I could get a rifle from the kids. The gear was camo backpacks and some purple midlayers emma took off. The yote was upwind, so he couldn't smell it, and it could have been coincidence that he was walking right toward it, but again, I thought it was weird.
Dukes doe is the 2nd deer we've shot in the last couple years with lower jaw injury. The other one had scars on the top of its nose and face too. It seems to me that both might have been coyote injuries but I don't have any evidence.

Ethan has had the caller out a few times lately and we can't get one to come in. It seems like something is different now. Higher population, less food, I"m not sure - but something is causing them to get pretty bold.

Congratulations...what a great weekend! Wow...those coyotes are too bold for comfort! Is there a lack of hunting pressure in the area?
S

Vtbuck223 said:
Congratulations...what a great weekend! Wow...those coyotes are too bold for comfort! Is there a lack of hunting pressure in the area?
Click to expand...

There is a LOT of deer hunters, so they always get a couple coyotes.
Typically there aren't many coyote specific hunters in the area, but a guy I know started recently and I think he said he got 6 in a weekend this summer.
I have a caller, and last winter Ethan called in a pack of them, but just couldn't get a shot because it was too dark. Typically I let them walk by me. I wasn't interested in skinning anything but a deer during deer season, but this year I probably won't give them a pass I guess.

Thanks for sharing. It sounds like another great weekend at camp!

That's a great weekend right there!
Thanks for sharing, and spending quality time with your kids!
Your little guy looks like one happy hunter

Awesome report. thanks for taking the time.

Great report. Congrats to all. Great to see the kids out there getting it done.
S

As it pertains to coyotes it was reported yesterday on a facebook page for south Burlington residents that a group of 6 coyotes attacked a dog around day break! The dog did survive.
S

Awesome ! The smiles on the kids faces just says it all. !

Great shooting and nice deer, Duke ! Liked the stories and great pictures too. And Emma's decision should make you very proud of her, as I'm sure you are.
G

Some happy hunters there. I think they are hooked. Congratulations.