It was time. I have no idea why I waited so long to build it. My old one was a rickety platform no matter how much I tried to shore it up, so this Summer I had vowed to myself that I was going to change all that.
It took me a day to build it, with the exception of some bolts I ran out of. And I'll just state it up front that it wasn't cheap, but this bench will last me the rest of my shooting and hunting life. I built it all out of pressure treated, and with screws and bolts factored in the butcher's bill on it was just a few bucks over $200.
I had done some looking for a design that I liked and found one in the form of this vid I discovered on-line. The guy was good enough to display his build dimensionally, so I'll leave that in a cut list if anyone is looking to do anything similar. With any build, I'd say modify it to your own taste and add or subtract as you see fit.......but this is what I came away with.
Shout out to "Great Builds" for the design and video.
The cut list:
Materials and Supplies:
2x4x8 - x5
2x6x8 - x3
4x4x8 - x2
5/4 8' Deck Boards - x5
7" bolts - x9
2.5" Deck screws

*Quick notes here:
-In the video the builder opted to tie in his bracing diagonally from front to rear of the platform on both long sides. In my build, I opted instead to add two more 4x4's
-His overall height on this build is 37". I dropped mine one inch to 36".
-Seat height was never mentioned and in experimenting with a height I thought I'd be comfortable with, I went with a base to seat height of 20", which works for me.
-I took his advice and sanded it, and then hit all edges with my smaller Bosch router bit with 1/4" shank round nose bit.

Great looking bench! I made a very similar one 7-8 years ago out of leftover PT and cedar decking. Use it often, especially this time of year. Enjoy!

You’all ain’t gonna have an excuse for missin no more!

looks rock solid. Are you going to paint or stain it?

longbow said:
You’all ain’t gonna have an excuse for missin no more!
Click to expand...

Hah.......right. Of course, I gotta see 'em first. My new excuse for this year might be that after I don't know how many years, I didn't get a doe tagr.
I'm gonna go with this one.

NoDeerHere said:
looks rock solid. Are you going to paint or stain it?
Click to expand...

Thanks, it sure is. I thought about that of course......but for right now, I just want to get it out there to use. I'll call it a consideration for later.
L

Here’s a picture of mine with the range in front of it. I have no idea why some of my photos come out sideways, if an admin can fix it that’d be great. 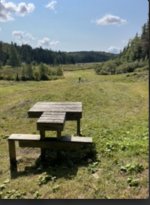 Not mine. Saw one recently will be my project next spring.

I have build that same bench a few times at a few different camps.