I am a self-taught deer hunter for the most part. However, I say it that way because I have learned a ton from this site in the past 8 years. Thank you all for sharing your knowledge. It has been a long road for me to get my first deer and the work finally paid off.

On November 15th I got into my stand just before legal. About 10 mins after legal I heard something coming my way. It was coming downhill from the south east directly to me. As it got closer I realized it was a doe, I drew but she decided to take a left turn at about 15 yards. I stopped her and let it fly, she took off further down the hill. A few seconds later I heard a crash. I was not convinced I got her (because I have missed so many times in the past). I waited about 45 minutes and got down to look for my arrow, I looked for about 5 minutes and could not find it but I also didn’t see any blood so my doubts grew bigger. I walked in the direction she ran and when I got into a clearing about 60 yards away, I could see the sun hitting her belly. I was psyched. The shot went to the right of her spine more towards the back. It grazed the top of her stomach, but it also went through the diaphragm on the left side and came to a rest against her left ribs. As she was running, the Muzzy Trocar was bouncing around in her vitals. I think she died fairly quickly.

I did not weigh her but between me and the butcher, we figured close to 70lbs. Small but I am thankful my 8 years of trying has finally paid off. It is a huge weight off my shoulders after going 7.5 seasons without success.

I have spent many, many hours in the woods, a lot of times seeing nothing and getting discouraged. This is where Hunting Chat comes in. Over the years, reading about all of the successes and failures other guys were having has kept me going. Not to mention all of the little nuances about deer and what it takes to get one that I have picked up from you guys. Much appreciated to say the least. 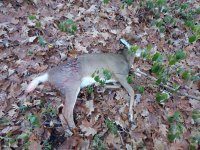 Congrats on your first deer! Way to stick with it.

Congrats on #1, you will never forget the first one!
F

Amy deer with the bow is a trophy….congrats.

Plenty of good eating there!

Congrats. You earned that one.

Nice job, way to stick with it!

thanks and yes, my family and I are really enjoying it.

jht2224 said:
Amy deer with the bow is a trophy….congrats.

Congrats on your first!! Here is to many more to come!

Congrats on your first. Next will be your first buck!
M

Great job. Are you continuing to hunt this season?

Muzzleloader said:
Great job. Are you continuing to hunt this season?
Click to expand...

Yes Sir. I have hernia surgery coming up mid-December so I am trying to get out as much as I can before that.

Yes Sir. I have hernia surgery coming up mid-December so I am trying to get out as much as I can before that.
Click to expand...

Good luck I had five done at once two on both sides low, and one under the belly button. I had it done a couple years ago.

longbow said:
Good luck I had five done at once two on both sides low, and one under the belly button. I had it done a couple years ago.
Click to expand...