SportsmanNH said:
He looks really happy to see you coming !
Click to expand...

He does. Though the goats and cats were happier to see him going. One of the cats were on the porch and couldn’t get in the house fast enough to meet its own standards.
G

Nice catch. I wonder how many deer he has feasted on.

Grandkid said:
Nice catch. I wonder how many deer he has feasted on.

Your question peaked my interest to open up the coyotes stomach to see if what it last ate. I did not expect to find a stomach full of deer meat intermixed with deer hair. The area is absent of snow which is said to decrease the odds of taking deer. 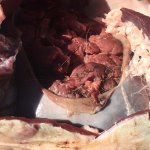 Looks like he had plenty of fat also. He fared pretty well until he met you. Thanks again for taking an apex out of the herd.

The coyote trapping season closed this past Sunday. I pulled the traps and placed them in storage with excitement to set at the season opener this coming fall. 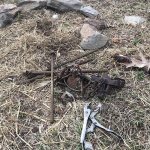 The warmer afternoons have me completing some task on the 6.2 diesel. The replacement piston has been installed and the replacement head torqued to spec. I ordered a new oil pan to replace the current corroded pan.

My daughter participates by passing tools and cleaning parts. She’s learning a tremendous amount about mechanics and how to fix things. 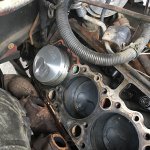 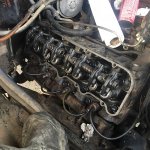 Pretty impressive that you are doing this work yourself!
Your daughter will have an insight into the workings of internal combustion engines unlike most!
Good job teaching her!

mowbizz said:
Pretty impressive that you are doing this work yourself!
Your daughter will have an insight into the workings of internal combustion engines unlike most!
Good job teaching her!
Click to expand...

This evening I was able to remove a damaged Ford F-350 6 speed transmission and replace it with a used unit. I’m doing my best to accomplish a large amount of work in the coming weeks before the summer heat arrives. 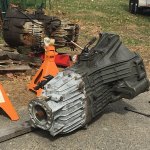 Turkeys routinely show up near my home about the second to third week of April. These two came walking up the driveway yesterday following a hen. 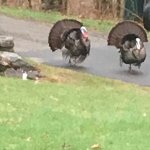 outdoorsman said:
Turkeys routinely show up near my home about the second to third week of April. These two came walking up the driveway yesterday following a hen.

Despite having those two toms walking the area I’m in I never got out turkey hunting. Opening morning I heard a close by shot and didn’t see those birds again.

I’ve been head deep in wrench turning. Replaced both cylinder heads on the gm 6.2. Replaced brake and fuel lines, installed the rear ends out of the crashed truck, and stripped the interior.

I ordered a driveshaft for the Ford earlier in the week. That wasn’t cheap!

Next will be a professional windshield installation.

I’m praying the fur prices increase for the coming season. 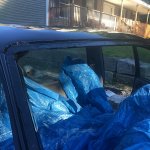 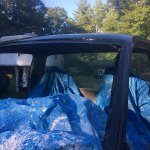 Nice work on the truck. You seeing many turkey poults over your way?

NH Mountains said:
Nice work on the truck. You seeing many turkey poults over your way?
Click to expand...

I’ve been searching for a gooseneck hitch for a cab & chassis frame and learned no company makes a bolt on application. There where some manufacturers in the past but they discontinued the hitch. All hitches now require modification of factory bases or building a base.

I picked up a 10” steel beam along with my concrete saw and turned a scrap piece of steel into a base! A 1/2 gallon of gas, a old cut off saw, ear muffs, and determination made for an acceptable product.

I purchased my 2019 deer tags/licenses two weeks ago. I have 4 tags to fill and should be a hunting fool. Four tags can be a taxing to fill though I’ll give it my best.

I’ve continued working on the 7.3 Powerstroke. It has been bodywork and some wrench turning. This weeks evenings were re-sealing the high pressure oil pump and rebuilding the turbo. Amazing how much money a seal kit and determination can save. I started the truck this evening and it runs well. 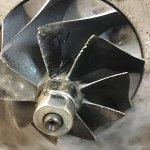 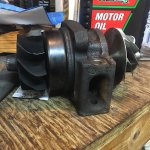 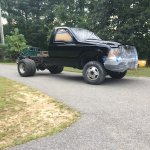 The paint came out excellent using a $20 gravity feed spray gun and a $150 of paint ordered online. I’ll be upgrading the spray gun. A 3” pattern is taxing.
G

2019 is nearly over. Fur prices are down and plowing is up. I’ll set a few traps for fox and coyote then go after fisher come December. I may do a little under ice beaver trapping.

Until then; here is my deer update. Two does and one spike have been taken by crossbow. I won’t be hunting the opener of muzzleloader. However, I’m ready for Monday evenings sit.

I tried sabots this year with a serious effort and have mixed thoughts about them. I would like very much to find a muzzleloader bullet that didn’t require swabbing after a shot or two though I doubt I’ll ever be so fortunate.

After 10 or so shots, and trying a different bullet, I was on the bull.

Try using Black Horn powder. It is much better.
Roger-

Per your advice I looked into the powder and will be purchasing a canister this winter. I’m amazed at all the positive reviews.


This muzzleloader is slowly becoming a single shot rifle. I moved to an in-line with a 209 primer, scoped it a few years ago, sabots this year, and soon to be the newest black powder substitute made.
You must log in or register to reply here.
Share:
Facebook Twitter Reddit Pinterest Tumblr WhatsApp Email Link
Top