Though we are in 2017 I figured it would be best to call this thread 2018. I also figured a trapping log doesn't fit under Hunting Logs, so here it is.

Preparations have begun for 2018, most notably repurposing my beast of a plow is making excellent progress. The to be color changed a few times but is locked in at dark green. We bought the paint so there's no going back now. 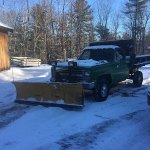 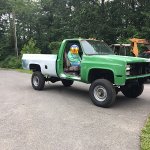 With the changes comes a new plow set up for the Silverado. I'm forced to upgrade to a minute mount. Luckily I found a MM1 3 plug system. It came with a 8' plow and I am changing it out to a 9'. The 9' blade I found was in rough shape requiring re-facing. I used a Husqvarna cut saw I bought off Ebay (I rebuilt the cut off saw because that too was in rough shape - mostly spare parts for that matter) to remove the rotted face along with a rugged grinder. I didn't take before pics but trust me when I say the plow was bad. 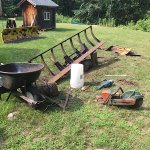 I did get a call for a nuisance beaver job. I heavily dis-like taking beaver outside the open season but had no choice in the matter. 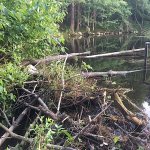 7.5" Foothold set and ready to be placed: 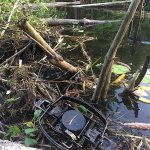 I have caught two beaver and will be happy to not catch any more until after hunting season ends.
Last edited: Oct 10, 2018

Excellent! Its good to hear others enjoy the adventure.


I was able to cut the tank this late afternoon. It cut a lot easier than I expected with taking me just a half hour to lay it out, then cut.

I did a burn test of removed sludge and found it to have a very high ignition point before starting the cutoff saw. 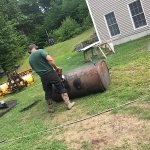 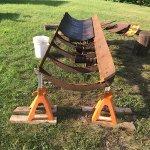 I'm going to leave the bungs in the other sheet (welded closed and ground smooth on the front) to prove my handy work.

Good stuff, enjoy the look in on the trapline and prep. Looks like one of my father-in-laws truck projects.

Keep the stories and photos coming Outdoorsman . Some day before I pass on I hope to take the NH trapping class. The stars haven't aligned yet for me.
B

good idea on the burn test

The burn test was indeed needed. Last thing I wanted was to blow myself up and second to that I am really pinching pennies on this project and wanted to avoid buying CO2 gas or dry ice.

Was able to get the face tacked in this evening. I was tempted to weld right into the night to avoid the hot sun but my little 110 welder doesn't need a marathon. I'm using flux core set at the highest output the welder has.

In a few weeks I'll post some pics of speed dipping my beaver traps. I like doing that on a cool dry day as the sun angles begin changing signaling time to get moving hard for winters prep.

Pictures or it didn't happen: 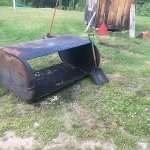 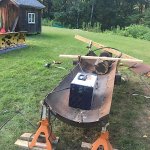 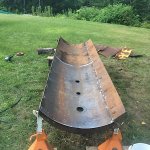 Was able to get the bungholes welded up this afternoon. I'd say the situation is trapping related as I used 11 gauge wire I normally secure traps with. In this case I cut pieces to weld on as handles. Works awesome and makes a great ground holder. The project has made me quite efficient with the Husky cut off saw. I cut the circle plugs with it!

Should have it painted this weekend. Evening work is out of the question today as I need to go into work for an evening event. 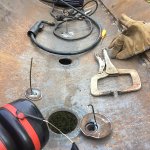 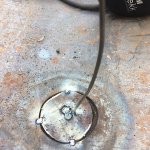 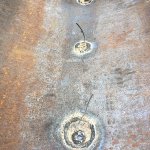 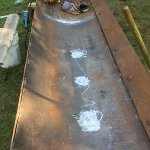 Was able to get some painting on my daughters truck done today. The 9' plow is all welded and ready for paint. I used 4 small 110 flux core rolls of wire. Put that little welder through its paces. I have to wash the plow real good before painting it.

Was able to put transmission lines and a power steering cooler in the red Chevy today as well. 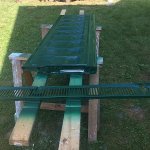 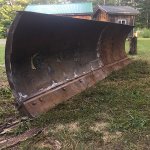 You're a talented guy outdoorsman. Although I am not a trapper I really enjoyed reading about your trapping skills. I still hunt and fish but not as much as I used to.May be because I'm 78 years old. Keep the talk and pictures coming about your prepping for the upcoming season. Good luck on next years harvest.

Thanks. Before long I'll be posting some great trapping pictures, hopefully a successful hunting picture as well. I don't have plans on buying M tags this year so it will be a one and done situation. Hopefully the first deer I see has some weight to it.

Anyways, I was able to paint the plow today. I discussed with my daughter about selling it and she responded "Hell no. It will take forever to find another cheap 9' plow and it looks brand new now."

Guess I have to find a different plow to flip. 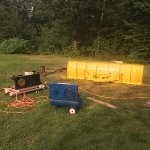 That looks great!
B

Looks good. Not to derail your trapping thread but if you have to cut into flammable tanks, oil, propane, etc. fill them with soap and water to push the fumes out the top. You can even cut them while full of water if your worried.

The weather was sticky and not ideal for my liking though I made some trapping progress today. After some frustration with the snow plow I decided I needed some trapping therapy and pulled out the Belisle traps I used last year for their annual dye job. I use a product called speed dip that some swear by while others mock it. In temps over 70 it has a tacky feel while at temps around freezing and below it becomes brittle and will flake some when a catch is made. The products suits me well and I plan on using it many years to come. Speed dip mixes with lantern fuel or gasoline, hence I store the mixture in a gas can. 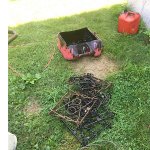 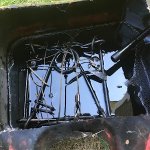 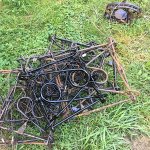 Ready for the trapping season: 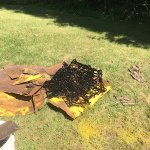 Almost forgot, the plow is done. I learned a lot about fisher control modules, wiring, and hydraulic controls that I should never need a fisher plow dealers assistance. I bought a used 3/4 complete wiring harness off Ebay said to be tested and complete. Turns out fisher harness's age and resistance changes, connections become poor and wires need replacing. Good news is their modules rarely malfunction. 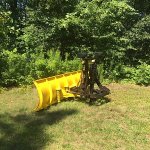 Painted the cab this evening! I misjudged the amount of paint I'd need using Acrylic Enamel and have to buy more this week. I guess I'm too used to Tractor Supply Enamel which seems to cover more. 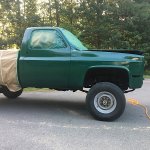 This thread is full of interesting stuff you do. Thanks for posting it all for us to see.

The obvious is I have to paint the bed; though I have some sanding and buffing to do on the hood as well. Overall, it is continuing to come along well. 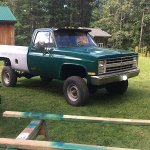 Truck is coming along well. Looks like a blast to the past in the F&G green. Might need a couple old school decals on the doors. 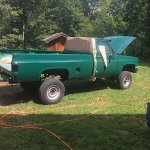 Began patching an 8' plow. Doing it just because it's there and I have the raw materials. Beats watching Television during the evening. 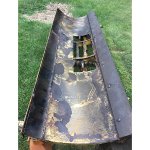 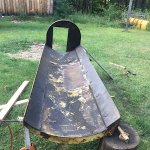